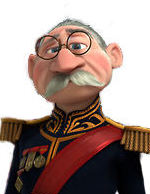 Introducing the Constitution-class Heavy Cruiser, as seen in Star Trek and Star Trek Into Darkness.

Built in stunning Super Gradetm scale and detailed to a level of accuracy only seen in the nightmares of real Master Builders, this starship is the defining piece of a new series of vessels from RememberMM.

The Constitution-class Heavy Cruiser was developed in the mid-twenty-third century. The first in a new generation of starships, the design of Constitution showcased a remarkable departure in Federation starship aesthetics, as well as featuring powerful new technology in every aspect of its design, from weapons to warp drive.

The most famous ship of this class was the USS Enterprise NCC-1701. In the year 2258 she, while under the command of acting Captain James Kirk, saved Earth and the Federation from a vengeance-obsessed Romulan miner named Nero, who was rampaging through Federation space (destroying Vulcan in the process) in revenge for the destruction of Romulus in an alternate timeline (a disaster which the Federation of that timeline had been unable to stop). With the assistance of an elderly Vulcan from that timeline, as well as his red-matter-carrying ship, the Enterprise destroyed Nero's enhanced mining vessel and ended the threat to the Federation. The Abramsprize is quite a silly looking starship though.  It reminds me too much of Kirk's motorcycle from the 2009 movie. The Sting Ray looked much better, and I'm still angry that he drove it off a cliff.

Haha, Talmid, I'm still mad about the driving off of the cliff, too!

The Abramsprize is quite a silly looking starship though...

I think the original Enterprise also had an illogical design... they had two large hulls, and decided to connect them with a skinny neck piece. At least the alternate Enterprise has a sturdier neck.

Haha, why do Star Fleet ships look like that anyway?

The sturdier neck makes sense, seeing as it is heavy cruiser designed to survive in combat and not break into a million pieces.

I think the reason was because all the crew quarters were in the saucer and engineering was in the secondary hull, and if something went catastrophically wrong in engineering they could just separate the saucer and fly away. Of course, most saucers don't have warp nacelles...

^^^ That and probably something to do with warp fields.

NICE work RMM! Forgive me for not being more enthusiastic about it, it's very accurate, and even makes the (cough) fake (cough) notEnterprise look almost beautiful... I still can't get over the ginormous nacelles that thing has... eh, anyways, she's a fine ship... just not the real NCC-1701

I must admit... you did a fantastic job with her... just wish they didn't ruin her with those uber engines.... :/

(You can't teach old dogs like me new tricks, and I'm 133 in dog years *which aren't actually seven years to one human year, but if they were... man I'm old. 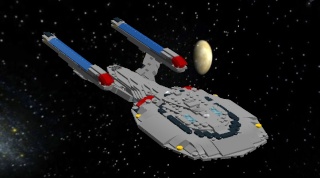 Hey, long time no see! I'll come right out and say it: I really miss your Star Destroyers.

"All that is necessary for the triumph of evil is that good men do nothing."  ~Edmund Burke[/size]

Spud, agreed, we need more RMM-destroyers... those were, and are, absolutely awesome.

(not that this isn't, but RMM's strongest point IMO is his ability to magically turn bricks at impossible angles to form an Imperial warship.

Man, you've still got the knack for SDs...

RMM does have a knack for making everything that travels through space in a movie... this is no exception. I gotta admit.. this is a pretty cool looking ship (the build is simply STUNNING!) If only it was NCC-1702